September saw Sutton Coldfield Speakers’ Club back in action after the summer break.

Our first speaker of the new season was Claire Worsfold-Morris who told us why September is the scariest month of the year. David Dugmore gave an impromptu speech from a choice of three titles, handed to him only ten minutes before he was called to speak. This is an extremely difficult challenge but David rose to the occasion and performed admirably to the title, ‘Things I Wish I’d Known’. The third speaker was Pam Collins who practised a speech related to her business. She addressed the club as though we were her networking colleagues and received feedback which she can now apply when making the speech for ‘real’.

New for this season is our ‘Tip of the Week’ slot and our education officer, Gary Allmark, delivered the first tip. He explained the benefits to the speaker of exploring the emotion he wants to generate in his audience. A speech shouldn’t be merely interesting facts and figures; it should also stir the audience in some way. When writing a speech it is important to build in emotion as well as hard information.

Hard on the heels of this meeting was the Sutton Coldfield Expo event in the town centre. It was lovely to chat to shoppers about what we do at the club. We look forward to meeting some of these people again at our future meetings. 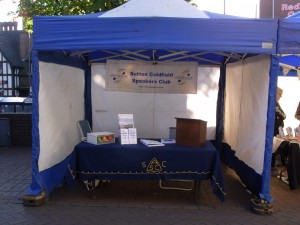