Our twice-monthly meetings at Aston Wood Golf Club give all Sutton Coldfield Speakers’ Club members a chance to gain experience and confidence in public speaking. But as part of our program, we also get involved in the activities of our national body, the Association of Speakers’ Clubs (ASC) and also with the wider community around Sutton Coldfield.
In February we took part in the ASC West Midlands Area speaking contest against Stourbridge and Bromsgrove. The contest comprised three sections: main speeches (pre-prepared and lasting 6 – 8 minutes), topics (impromptu speaking on a given topic and lasting 3 minutes) and evaluations (a constructive critique of a ‘target’ speech and lasting 3 – 4 minutes).

Martin Fleet represented Sutton Coldfield in both the main speech contest, speaking about the perils of buying a sofa, and also in the topics contest. In the latter, Martin was given the topic, ‘If music be the food of love’, just seconds before he began speaking. Sally Jenkins represented us in the evaluation contest. Our contestants put up a strong fight but unfortunately didn’t come home with any silverware.
The ASC Midlands District contest in March was a follow on event from this, featuring high-calibre speakers from across the Midlands. We went along to support our West Midlands representatives and learned a thing or two as well. All the speakers demonstrated ‘the power of the pause’ and the dramatic effect that can be produced by speaking slowly – something we must all remember.
Closer to home, Pam Collins, president of Sutton Coldfield Speakers’ Club, joined Observer editor, Gary Phelps and the chief executive of Sutton Coldfield Charitable Trust, Ernie Murray on the judging panel of the annual Royal Sutton Coldfield Schools Parliamentary Debating Competition, held at Sutton Coldfield Grammar School for Girls. Sutton Coldfield MP Andrew Mitchell chaired the event. Pam was impressed by the calibre of all the young speakers and found the evening both inspiring and enjoyable. 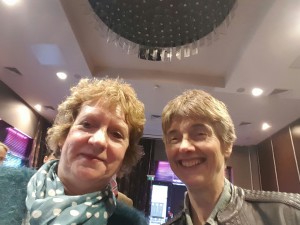